At the very beginning let me ask you a question and that is ‘What have made the 20th century the fastest and sophisticated era ever?’  In reply you may say internet, automobiles, aircraft, and others countless accessories and products. But you might be astonished if I say that air compressor is the only thing that works behind directly or indirectly in production almost all of these things.

So to investigate the evaluation of the air compressor we need to look back approximately 3000BC. Our lung is the earliest air compressor since after the invention of fire people usually use the compressed air from their lung to stoke the fire.

The way our lung produces compressed air is very simple. As human body does both inhale and exhale the oxygen it automatically exhales the inhaled oxygen as a compressed air. With the passage of time the use of air compressors widened and expanded out in various fields but with inadequate strength.

With the prevalence of metallurgy the metal-smiths soon realized the adequacy and felt the demand of higher temperature to melting down various metals such as gold and copper etc.

‘Necessity creates the innovation’ a proverb goes. We know that human breath has also carbon-dioxide along with the oxygen which can be an obstacle in sustaining fire. Apart from this our lung is not able to produce air more than .02-.08 bar. As a result the demand of something more powerful for air production was growing intensively.

It was the first mechanical Air compressor which was actually a hand and foot controlled air bag pretty much able to produce the level of temperature required to melt down the metals.  The hand-held bags was the first version of the Bellows which  could produce concentrated blast of air by sucking air in through one side and became extended. Then the sucked air was pushed out when the handles are squeezed together through the other side. 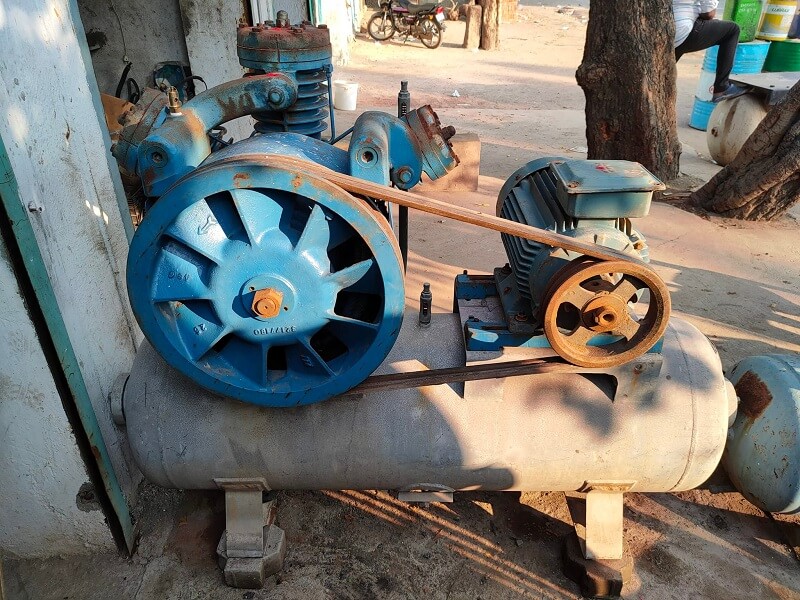 The foot controlled bellows was the upgraded version and was more advanced than the hand-held one. Later, Bellows was replaced by a water wheel-driven cylinder introduced by Jhon smeaton, a professional engineer in 1762.

It was smart and effective but being so it was not lasted long time and soon replaced by another new blasting machine introduced by Jhon Wilkinson in 1776. Since the without the primitive principles of foundation no civilization can evolve Wilkinson’s blasting machine became an archetype for the later modern mechanical air compressor.

Gradually with the technical improvement of air compression and its power it was no longer confined into metalworking rather than used in several purposes such as fabricating the metals and ventilation to underground areas.

Later, the range of use of air compression noticeably increased when it was used in the project of Italy-France rail system where a large air volume had to move in to the 8-mile construction tunnel in 1857.

With the engagement of this mega project air compression had taken into account seriously forthwith in those days. As a result people started to experiment on its use to utilize it with more advanced technology for further biggest usages.

To investigate the breadth and advancement of air compression more deeply at this we need to look back a few years earlier. In 1800 air compression became the mainstay of transmission energy. With this flow in 1888 Victor Popp, an Australian engineer, modified its use in a greater context.

He founded a Compressor plant and within just three years he modified and extended the plant from 1500 KW to 1800 KW. It was a revaluation indeed in terms of air compression advancement since it opened a new window for more innovation such as incorporating electricity and pneumatic energy.

During 1990s the world witnessed so many surprising innovations one after another and air compression contributed in almost every sectors. With the rising of automobiles and aircraft the world appeared newly to us and surprisingly both of these completely driven by the compressed air.

However living in the modern era we all are well informed about how much our progress and development rely on air compression nowadays. The industrial revolution hastened literally only for the advancement of air compression.

Apart from these, in our traveling and everyday life nothing has brought the change the way air compression did since from car and vans and to light rails and security almost everything largely reliant on powered machines and tools.

Today we are facilitated having so many small air compressors according to our requirements. But if we look back to the history we will see that the progress and advancement of air compression did not happen over a night.

So many people worked hard to develop and upgrade it and thus the modern era is truly owed to them. At present days, air compressor comes with diversity that offer a huge variety including oil-less, Vehicle-mounted and so on and you can get your desired one according to your requirements.